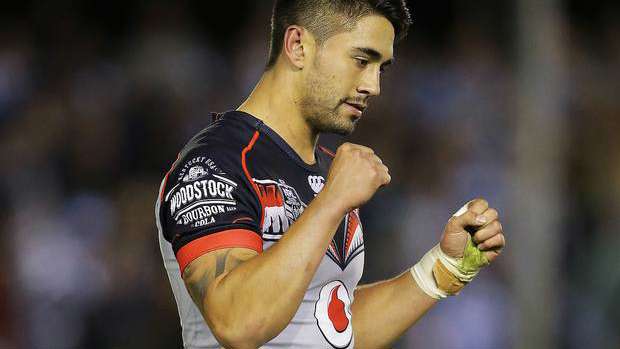 Shaun Johnson's move to the Cronulla Sharks has been confirmed, with the Kiwis halfback signing a three-year deal.

The Sharks announced the signing this afternoon, just three days after Johnson was granted a release by the Warriors.

"It's been a crazy few weeks but it's good to lock it all away. I can't wait to get over here and to rip in. It's really exciting," Johnson said. "I want to add value where I can. The Sharks are a tough side, they know how to win and that's what I'm excited to be a part of."

Team I'm excited to tell ya that today i signed a 3 year deal with the Cronulla Sharks. Big move and big change but something we're definetly ready for. New challenges and a new level of footy is got me feeling pumped. Again thank you for your support, looking foward to this being fish and chip paper so we can put it behind us and get going with things. Lessgooo!

The move to the Sharks could see Johnson relinquish his favoured No 7 jersey and slot into the halves alongside halfback and former Warriors teammate Chad Townsend.

The move out to five-eighth would follow his selection at No 6 for the Kiwis for their shock win over Australia in Auckland last month and throughout the end of year 2-1 test series loss in England.

Johnson has played the bulk of his 162 games for the Warriors at halfback but this year played more like a five-eighth in a roving role, while No 6 Blake Green took on the organising responsibilities.

The change eased the burden on Johnson and allowed him to inject himself into the attack whenever he saw opportunities to unleash his lethal running game.

Joining the Sharks will also see Johnson benefit from playing behind Cronulla's monster forward pack, with the likes of wrecking-ball Andrew Fifita, captain Paul Gallen and skilful back-rower Wade Graham sure to provide him with time and space to work in.

However, it will be intriguing to see how he adjusts to his new surrounds and fits in under a new regime.

Sharks coach Shane Flanagan was thrilled to be adding Johnson to the squad.

"To recruit a current Test half at this time of year is a massive boost to our club, the playing group our members and fans," Flanagan stated.

"Shaun's football talent is going to be a huge plus for our team and his experience will undoubtedly help with the development of our younger players."

Flanagan is known for taking no prisoners as a coach, demanding excellence from his players and having no time for those that fail to pull their weight.

Gallen, too, is one of the most hard-nosed professionals in the NRL and the outspoken front-rower won't pussy-foot around in telling Johnson exactly what is expected of their new star recruit.

Johnson is accustomed to pressure but struggled under the weight of expectation at the Warriors, but that will only intensify while he is living and playing in the goldfish bowl environment of Sydney.

This article was first published on nzherald.co.nz and is republished here with permission.